What Molds Are Considered Toxic? 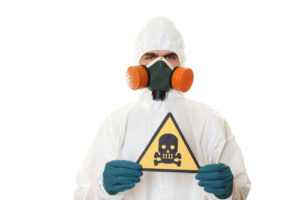 Poor Air Quality Due to Mold Could Be Affecting Your Health

“Toxic” is a term commonly applied to a number of diverse things ranging from chemicals to relationships. So what does the word mean when it’s used in reference to mold? Please allow our NYC mold removal experts to separate facts from fiction.

In a word, no. Toxicity actually lies in chemicals called mycotoxins that are produced and released by mold. Different mold species may produce one or more varieties of mycotoxins, but the chemicals have no intrinsic value to mold’s reproductive process so scientists are still unclear as to their purpose.

Are “Toxic Mold” and “Black Mold” the Same?

Black mold does produce mycotoxins, but the term is a shorthand name for a specific type of mold called Stachybotrys chartarum. Aspergillus and other forms of toxic mold can appear in colors such as gray, gold and yellow- or blue-green.

Is Toxic Mold a Health Hazard?

“Toxic” is sometimes interpreted as “fatal,” and while exposure to mycotoxins almost never rises to a deadly level, it can adversely affect health. Centers for Disease Control and Prevention (CDC) lists upper-respiratory symptoms such as sneezing and coughing as possible results from mycotoxin exposure, even in people who have not previously suffered from allergies.

People with asthma, compromised immune systems and similar pre-existing conditions are particularly vulnerable to mycotoxins, as are young children and the elderly.

Toxic or not, indoor mold infestations should be treated immediately. Contact Stern Mold for more information.